How Does Texting and Driving Affect Truck Accidents? 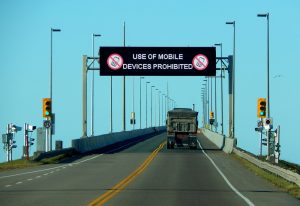 Many people know how dangerous it can be to text while driving. However, a significant amount of drivers do it anyway. Texting is one of the most common types of distracted driving. It can lead to severe injuries, destructive property damage, and even death. If someone decides to look down at their cell phone to read or send a text, they can’t notice what’s happening in front of them. This lack of attention prevents motorists from responding to upcoming hazardous conditions appropriately.

Truck drivers commonly become distracted during their many hours on the road. Unfortunately, accidents between commercial trucks and passenger cars are often catastrophic. Even if the trucker isn’t speeding, the impact of the collision can cause serious injuries to the smaller vehicle occupants.

According to the Federal Motor Carrier Safety Administration (FMCSA), anyone operating a commercial motor vehicle is prohibited from using a hand-held mobile device. The operation of a commercial vehicle also includes being stationary with the truck running because of traffic, a traffic control device, or another brief delay. The only exception to this federal law is if the truck driver communicates with law enforcement or another emergency service.

Why Texting and Driving Causes Accidents

All commercial truck drivers must obtain a commercial driver’s license. Driving a large truck takes significant skill and knowledge. Since a fully loaded tractor-trailer can weigh up to 80,000 pounds, the driver must understand how to maneuver it safely around other vehicles and know what to do when encountering hazardous conditions.

Texting and driving increases the risk of an accident. Even if a truck driver looks down at their phone for a few seconds, it’s enough time for the scenery in front of them to change. If the trucker isn’t focused on the road ahead, they may not notice if someone swerves into their lane or large debris gets in their way.

The Centers for Disease Control and Prevention equates texting while driving as driving with your eyes closed. A vehicle can travel the length of a football field in the time it takes for the driver to read or send a text message.

When a large truck and small car collide, the occupants in the smaller vehicle tend to suffer more serious physical harm. The most common injuries include:

Typically, truck accident victims require emergency medical care and ongoing treatment. Some never fully recover and end up with a disabling condition. The expenses associated with a permanent injury can cause financial struggles and even lead to debt.

Proving Fault After a Truck Accident

You can pursue compensation from the negligent truck driver following an accident. However, you must prove they were texting while driving. It can be challenging to obtain evidence to show the trucker should be held liable for your injuries.

It’s critical to hire an experienced truck accident attorney and seek medical treatment immediately after the crash. While you’re attending your doctor’s appointments, your lawyer can use the resources at their disposal to gather the evidence necessary to prove the truck driver was at fault.

Tiemann Law Firm has fought on behalf of truck accident victims for over 20 years. You can depend on us to advocate for your rights and fight to hold the truck driver liable for their reckless behavior. We will pursue the maximum compensation possible and work hard to try to reach your desired outcome.

Call us at (916) 999-9000, or reach out to us online right now for your free consultation if your accident and injuries occurred because of a truck driver texting while behind the wheel.